What’s the difference of paint used on mall kiosk ?

There are many different types of paint when we doing a mall kiosk . Paint as a finished material used in lots of retail kiosk and display fixtures. So , what’s the different of each method ? How to choose a right paint for your projects?

Paint-free: As the name implies, do not paint. Paint-free doors generally refer to the PVC veneer mall kiosk, which is lower in price and grade than the paint kiosk.

Baking paint: Baking paint refers to the high-temperature baking after painting. Baking varnish also has many different processes. The advantage of baking paint is that the spraying process of the factory is generally more stable than that of painting on the spot. The most important thing is that the curing process of the paint is carried out in the factory. Most of the harmful substances released will not affect the indoor air of the family and reduce pollution.

Clean oil and mixed oil: Clean oil, also known as clear water paint, is one of the painters’painting processes for woodworking products. It refers to the direct painting of transparent paint (also known as varnish) on the surface of wood with better wood grain. After the operation is completed, the wood grain can still be clearly seen, and there is a natural aesthetic feeling. The corresponding concept is mixed oil, which is to completely cover the surface texture of the material, only the color of the paint can be seen.

Open lacquer: Open lacquer can be divided into full-open lacquer and semi-open lacquer. Also known as water whitening. Its principle is to retain the natural woody pore, highlighting the texture. If the pore is completely covered, it is an ordinary sealing process. If the wood is soft, hand brush can also be used, such as Chinese fir; if the wood is hard, it must be sprayed. Open paint is a kind of wood painting process relative to closed paint. The mixed paint mentioned above is closed paint.

Waterborne paint: Waterborne paint is a kind of paint which uses water as diluent and does not contain organic solvent. It does not contain benzene, toluene, xylene, formaldehyde and free TDI toxic heavy metals. It is non-toxic and odorless. The corresponding concept is paint. Water-borne wood paint has the advantages of environmental protection, but it also has shortcomings. Generally, the paint film is not full and the strength is not as good as the paint, so it is not suitable for the surface which is often rubbed. 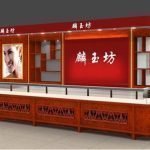 How to do quality check for jewelry kiosks?Kiosk Ideas